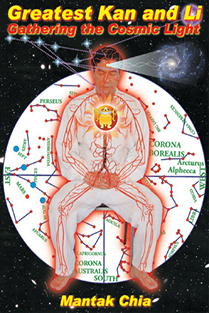 This booklet contains instructions for the final of the Kan and Li meditation series, the Greatest Kan and Li. The essence of the Greatest Kan and Li practice is the establishment of the cauldron at the Heart Center, also known as the Middle Tan Tien or Cinnabar Palace, and the further refinement of the soul and spirit. It is at the Heart Center that most of the Greatest Kan and Li practices take place. The coupling of the energies here, involving macrocosmic-microcosmic energetics, is the central formula. The Kan and Li practices point to the Taoist road to spiritual immortality and Taoist internal alchemy. The immortal fetus is produced, nurtured and finally matures into a spirit body which unites o­ne with the Tao. Master Mantak Chia is the first Taoist to introduce this spiritual discipline to the Western public. As well as the instructions for the Greatest Kan and Li practices, the student is given instructions o­n the basic formulae to practice in preparation for the higher practices. The practitioner then learns the foundation procedures leading to coupling at the Heart Center; the activation of the Cranial and Sacral Pumps and the Alignment of the Three Triangle Forces. Coupling then leads to the birth of the Inner Child or Pill of Immortality. Other practices described in this booklet help you to draw energy from the Cosmos, enabling you to “plug in” to a resource of limitless power.